In a serious bid to stop citizens from smoking, New Zealand has recently taken the high road with e-cigarettes. Starting as early as 2018, New Zealand e-cigs will be legal to purchase and use.

While the proposal still has to make its way through a final vote, everything looks like it’s in order for it to pass with ease.

While other countries have been quick to lump e-cigarettes in with traditional tobacco products and place tough restrictions on vapor products, New Zealand has decided to go with the science instead. The main argument they have made in favor of this legislation is that it provides both short- and long-term risk reductions to users. 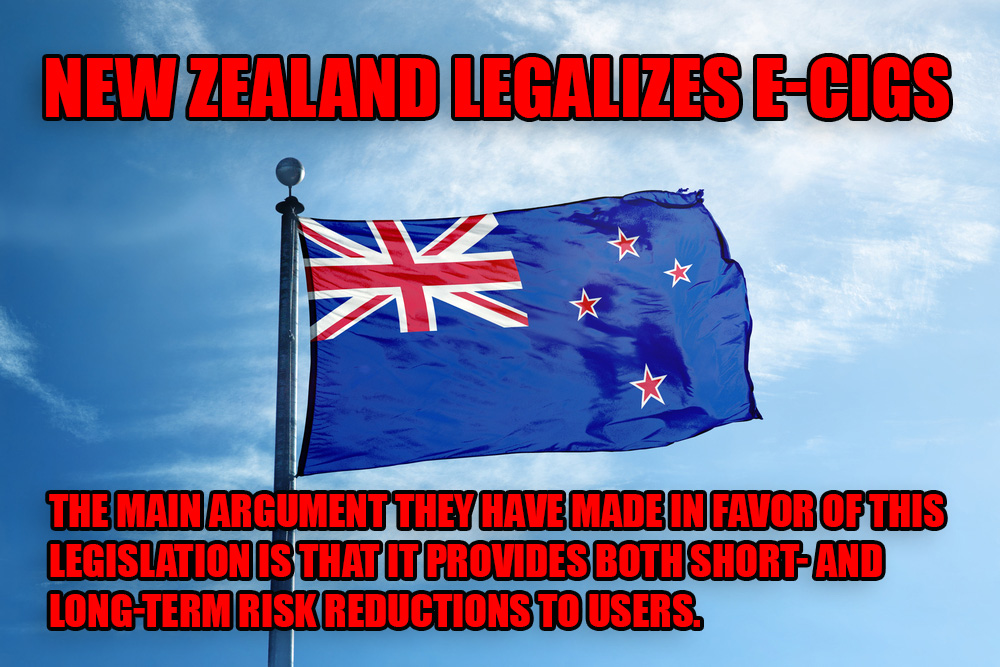 In the short term, it eliminates the harmful effects of secondhand smoke and the chemical carcinogens found in regular cigarettes. Long term, it provides a useful means of stepping down from nicotine altogether. In their eyes, this is a win-win and a great way to help people quit smoking in a country where they want cigarettes out for the health of the entire public.

Playing By the Rules

Naturally, some rules will accompany the legalization of vapor products. Again, they are doing this in the interest of public health, so vapor will still be banned for those under the age of 18 and in public places where smoking is already banned.

Vapor companies will have limited options for advertising to keep nicotine products out of the hands of minors, but these are all standard rules that every country has put in place thus far, and they do make sense.

Hungry vape advocates now have their eyes trained on New Zealand as a potentially explosive market for new products. Residents will be able to buy e-cigs online, and buying an e-cig in stores just got easier.

Once we have a final legalization date, you can bet that vapor shops will begin gearing up to throw grand opening parties across the island.

Those asking where to buy e-cigs will likely see vape shops popping up in their neighborhoods within the next few months as stores start building out and stocking up.

There is also good reason to believe that vaper lounges with e-liquid bars will become a major part of the community, offering a friendly gathering place and a way to connect with other vapers in the area.

Are E-Cigs Legal in Australia?

The legal status of e-cigs in Australia is a tough one. Technically they can be purchased online and imported, but there are very strict rules regarding e-liquids that often require a doctor’s prescription. Each state has its own guidelines for ordering and storing e-liquids as well.

VaporFi will be leading the charge into New Zealand with our cutting-edge technology, making it easier for the world to see that vapor is a great alternative to smoking. If you’re ready to make the switch, visit VaporFi online to shop our entire selection of top-quality devices and vape juices!

How to Order Vaporizers and Vape Juice in Australia